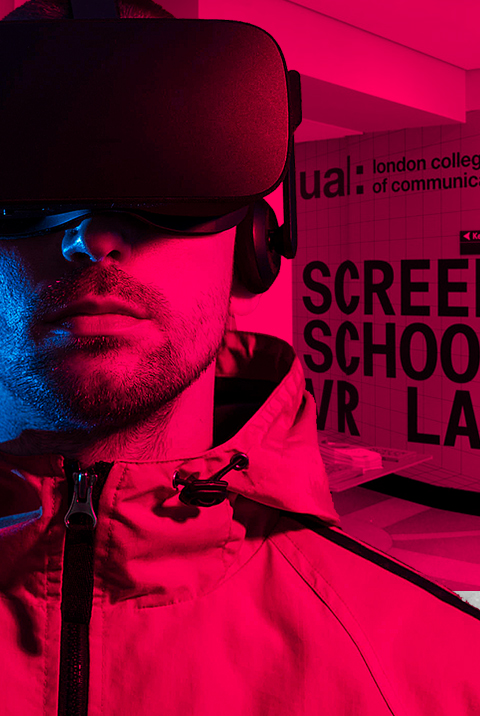 What is the VFS-UAL: LCC Pathway Program?

The UK is home to the largest virtual reality and augmented reality sector in Europe. Students studying in London can benefit from being at the heart of the worldwide immersive technologies market – an educational experience headquartered in an investment capital while surrounded by an ever-growing infrastructure of emerging tech.

Alternatively, all VFS graduates that have also completed an undergraduate degree (hons) will receive guaranteed admissions into LCC’s Virtual Reality program regardless of the Bachelor’s degree discipline. They will also receive an exclusive 20% tuition rate discount.

London College of Communication (LCC), is part of University of the Arts London (UAL) and ranked 2nd in the world for Art and Design, according to the 2021 QS World University Rankings®.

Taught by experienced practitioners, their graduates go on to shape the creative industries by forging their own paths in thoughtful and experimental ways.

LCC is connected to industry, building partnerships with organizations ranging from start-ups and charities to leading global businesses. Through the use of their diverse voices and experience, LCC works closely with local communities to transform the world around them.

Create immersive virtual and augmented reality experiences for a cross-section of applications in industry and enterprise. This 8-month program allows students to become proficient with Unreal Engine, Unity & programming and acquire an array of knowledge needed to thrive in a VR/AR project pipeline. During the program, students work directly in the industry on client-led projects while also building their own VR/AR applications and portfolios to launch a career in this emerging sector.

After completing the VFS VR/AR Design and Development Diploma, students will receive advanced placement into the 2nd year of LCC’s BA (Hons) Virtual Reality Degree program. The BA (Hons) Virtual Reality offers the chance to design and shape the future of the VR field, giving students the opportunity to test and work with new immersive and interactive tools for film, games, design and remote collaboration.

Individuals who have completed any VFS full-time academic program as well as an undergraduate degree (hons) will qualify for admissions into LCC’s MA in Virtual Reality, and will receive a 20% tuition rate reduction. The MA Virtual Reality (VR) provides the opportunity to explore and develop the application of VR technologies across filmmaking, visual effects (VFX), animation, games and immersive augmented reality (AR) experiences.

What are the UAL: LCC admissions requirements?

Does UAL: LCC have an internal English placement test?

IELTS Online is an intensive course aimed at preparing you for the Academic IELTS exam, developed and taught by the Language Centre at University of the Arts London.

At the end of the course there will be a full IELTS practice exam with individual feedback.

*VFS recommends all students to enter VFS with the required IELTS scores indicated above to ensure a smooth and seamless transfer to UAL after graduation.

UK student visa applications are processed within 3 weeks (15 working days) of the completed application being lodged.

Where are the programs located?

At the London College of Communication campus located in the heart of London, at Elephant & Castle. The College is on a single site, within easy reach of various parts of the city and well served by tube, bus and rail networks.

Can I still apply for the MA in Virtual Reality if I don’t hold a Degree in the same discipline?

Students who hold a Bachelor’s degree with honours in a closely related discipline are usually given priority admissions consideration.

How does UAL: LCC define a Bachelor’s Degree with Honours? What if I completed a Degree that was not an honours degree?

The honours requirement is any undergraduate Bachelor’s Degree that contains a larger volume of material or a higher standard of study, or both, rather than an "ordinary", "general" or "pass" Bachelor's Degree.

For example, in Canada, this could represent an award of Honours after four years of undergraduate study, instead of the three years of a 'general' Bachelor's Degree. In the UK, the award of Honours is achieved though completion of an honours project, requiring a higher degree of specialization than non-honours undergraduate degrees.

Students with a Bachelor’s Degree without honours would not be guaranteed admission to LCC’s MA Virtual Reality.

What are the approximate tuition fees?

What are the application fees?

Are there additional program fees?

You may need to cover additional costs which are not included in your tuition fees. These could include travel expenses and the costs of material. Find out more about additional costs here.

MA Virtual Reality: Full Time mode only and runs for 45 weeks over 15 months. You will be expected to commit 40 hours per week to study.

Are VFS alumni eligible for the Pathway?

Yes, VFS alumni may apply for either Pathway option. Those VFS alumni interested in the undergraduate Virtual Reality stream but did not graduate from the VR/AR Design and Development program will be required to complete the full 3-year program at UAL:LCC. Advanced placement is only rewarded to VR/AR graduates.

All VFS alumni that also hold an honours degree are most welcome to apply for the MA Virtual Reality. Only VFS VR/AR graduates will received guaranteed placement.

How do I obtain an acceptance letter? Can I receive conditional acceptance?

If a VFS student is accepted, they will be issued an offer letter. Once the student receives their results, and providing they meet the offer conditions, a Confirmation of Acceptance for Studies (CAS) will be issued by UAL. Alternatively, students will receive a conditional offer letter if they do not meet all admission requirements.

The offer, however, remains open until a deposit of £4,000 has been paid. The remainder of the tuition fee for the first year of your course must be paid before you enrol at the start of the academic year. Once you have enrolled, the deposit will contribute towards your total tuition fee payment.

When is the earliest a student can apply for a UK Student Route Visa?

The earliest a student can apply is 3 months before the course begins as the University issues CAS numbers from 3 months prior to the course start date.

When is the earliest a student can apply for the UAL: LCC Virtual Reality BA or MA?

A student should aim to apply at least 6 months prior to the start of the course. Later applications will still be considered.

Are seats limited? What is the average class size?

UAL is ranked 2nd in the world for Art and Design according to the 2021 QS World University Rankings®, and places on our courses are understandably in high demand.

The group sizes are typically between 10-15 students.

*Please notify a VFS admissions advisor of your expressed interest in pursuing the VFS – LCC pathway prior to your VFS commencement date to confirm seat availability.

Can I work while attending the program?

Yes. In the UK, as an international student, you can work for up to 20 hours per week while studying in the desired program.

Will I be eligible for a post-graduation work permit and be able to work in the UK after graduation?

Currently, international students are allowed to remain and work in the UK for up to 2 years.

What are the UAL: LCC accommodation options?

Accommodation Services is available to all UAL students looking for a place to live. For more information, please contact a UAL admissions advisor.

Who can I contact at UAL: LCC if I have further questions and to begin the admissions process?

Their Country Manager, Jess Gill. Fill out our contact form and Jess will be in touch.

Disclaimer: Admission to VFS does not guarantee access to UAL programs. Applicants must meet UAL requirements. Seat capacity is limited.

The VFS Admissions team can assist you in selecting the program that best suits your goals, and to help you submit an application that reflects your abilities, giving you the best chance of being accepted.